We Will Be Giants!?

Dame st. was glowing with warmth as an unusually eh.. summery? summers day was coming to a close last Friday (3rd August 2012) evening. Upon entering the candle lit Mercantile venue there was a sense of something I hadn't expected, relaxation and calm. The lads of We Were Giants were greeting people at the door in their typical down to earth and polite way, if you had not have heard these guys before you would probably have been expecting some light acoustic tunes, maybe even a Bon Iver cover.

Inevitably the soft candle light turned out to be just the trick as the first support act took to the stage and it wasn't a million miles away from Bon Iver either... Seasoned pro Mark Geary delivered in typical fashion with a set of soft thought provoking tunes, finishing with a ruff and gritty belter.... Even Colm O'Loughlin added to the set combining his vocals with Gearies to make the worlds smallest (but just as effective) vocal choir.

Next up was Radio Friendlies with their power pop sound. It wasn't hard to tell the last few albums this band listened to before they wrote the songs that made up there set.... riffs mirroring the likes of Feeder, Nirvana and Pixies were rampant in there songs, so much so it was easy to mix up a lot of them with covers. They're bassist seemed uninterested at times, with shy vocals that hardly had any impact. However they were tight that's for sure, with a confident front man too. With a bit of fine tuning they could have potential, but they'll need to dig deep for something fresh. 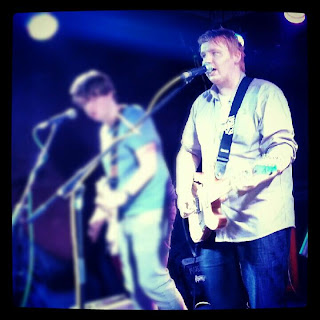 We Were Giants next and all of a sudden the candlelight seemed to fade, replaced with stage lights and darkness. Anyone who was eagerly awaiting a taste of what was to come after Part One (WWG's debut E.P.) was to be satisfied immediately, as "the giants" opened with a new one... "Satellites". If this tune is a sign of the future for WWG then the future looks bright indeed. It was also a first look at their shiny new drummer Jason Maleney who took over from Ger McGauley just a few months ago. Jason was solid and looked the part too, I think he will fit in nicely with the lads. He teamed up well with Danny "Foreskins" Farrelly, who's reliable and strong bass lines blended perfectly with the guitars. The brothers Colm and Ste O'Loughlin were like a tag team on the mic taking turns introducing songs. Together the two created a gig worthy of a much bigger stage, with riffs, harmonies and hooks that could hold their own against ANY other band in Dublin today. It wasn't long before they swooped into fan favourite "Vampires" along with a set full of other Part One hits, finishing with the climatic "This is it"..... A two part ballad that starts epic and ends with an explosion of guitars and vocals, definitely one of there best. A monster ending to a monster set. These guys are a must have for your music collection and it would be well worth keeping an eye on their tour dates too. It remains to be seen whether they will in fact be giants, but with a set like this it would take a monster to stop them!

http://www.youtube.com/user/werewegiants?feature=results_main
Posted by Unknown at 08:18